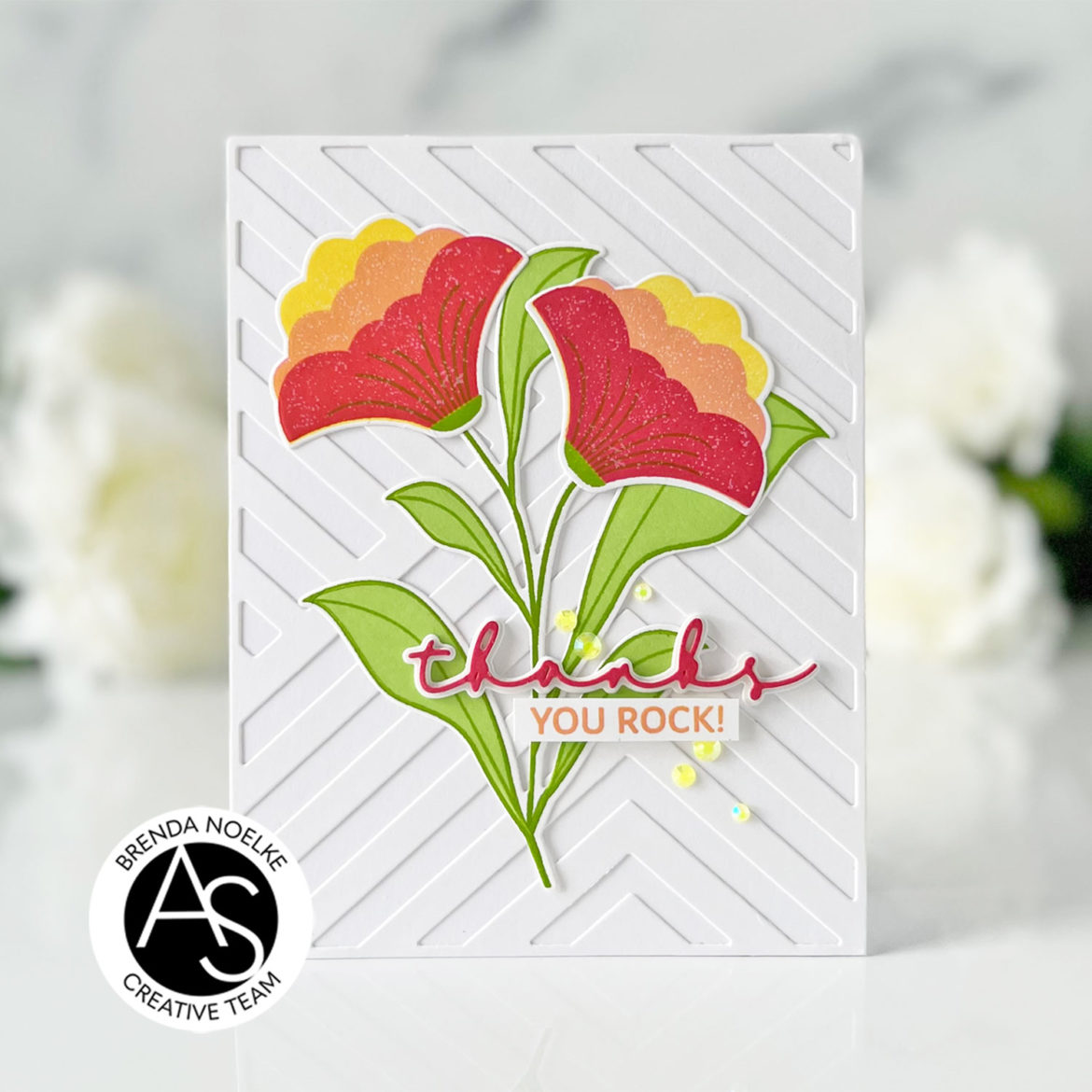 I’m here to share the details for the card that I shared over on IG for the Catherine Pooler collaboration hop on Thursday!! You still have a few days to join in the fun over there!! There are a couple of great prizes up for grabs!! 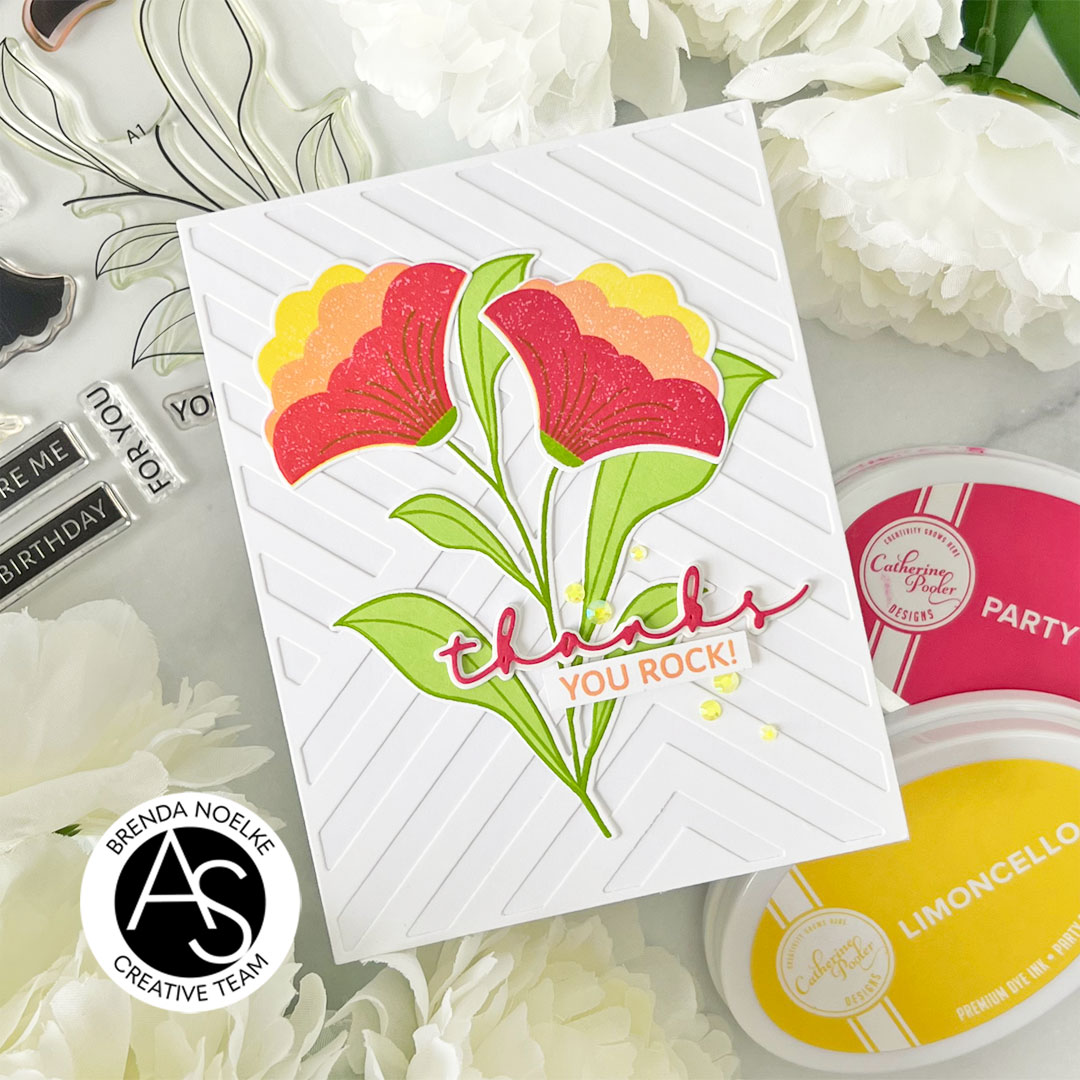 Can you believe that these are the same colors that I used on my card last week? They create totally different colors when layered!! I began by stamping images from the For You Stamp Set with Catherine Pooler inks. I used Garden Party and Lime Rickey for the leaves and Limoncello, It’s A Girl and Party Dress for the flowers. I stamped the speckled layer of the flowers with white pigment ink, then cut the images out with the Coordinating Dies. 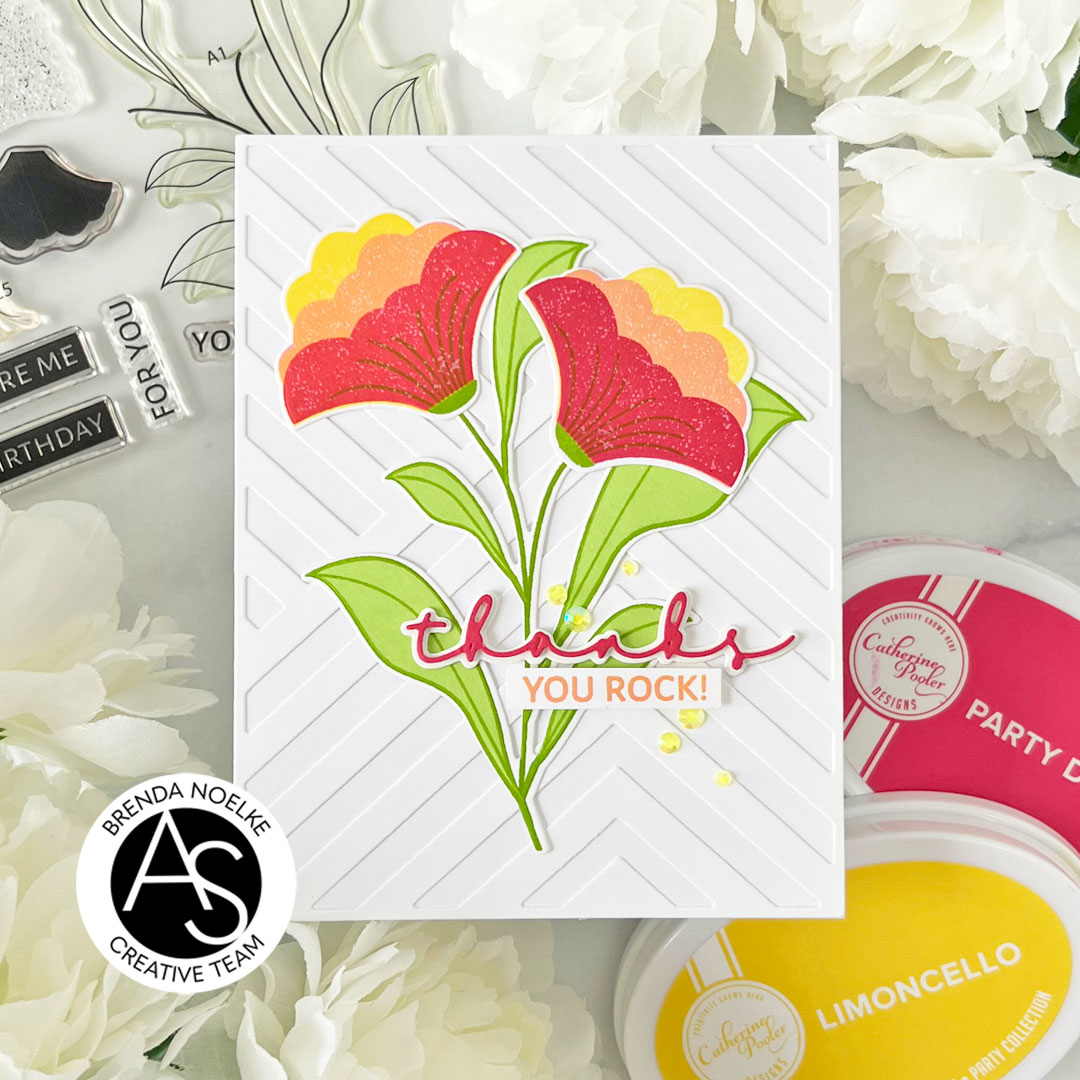 For the background, The Modern Stripes Cover Die was die-cut from white cardstock and layered over an A2 white card base. The floral arrangement was adhered with liquid glue. 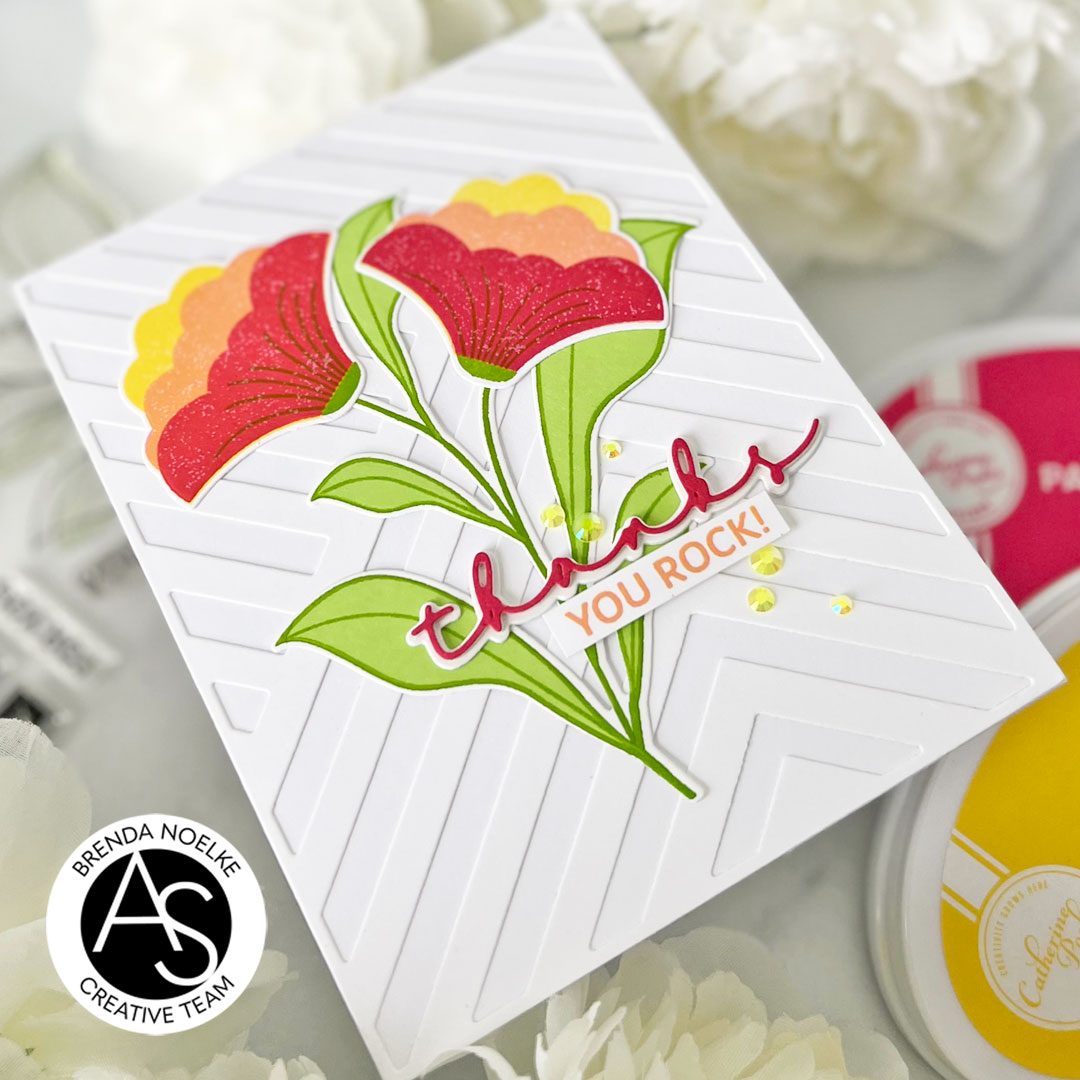 The sentiment was created with a combination of the Thanks Die and the For You Stamp Set. I layered the same yellow and pink inks that I used on the flowers onto a piece of white cardstock by dragging the ink pads directly onto the paper. The top layer of the Thanks Die was cut from the inked cardstock once and heavyweight white cardstock two times. The bottom layer was die-cut from heavyweight white cardstock twice. The layers were stacked and adhered together with liquid glue, then adhered to the front of the card. “You Rock” was stamped onto white cardstock with Limoncello and It’s A Girl inks, using the For You Stamp Set. It was trimmed into a narrow strip and popped up with foam adhesive. A few yellow gemstones were the perfect finishing touch. 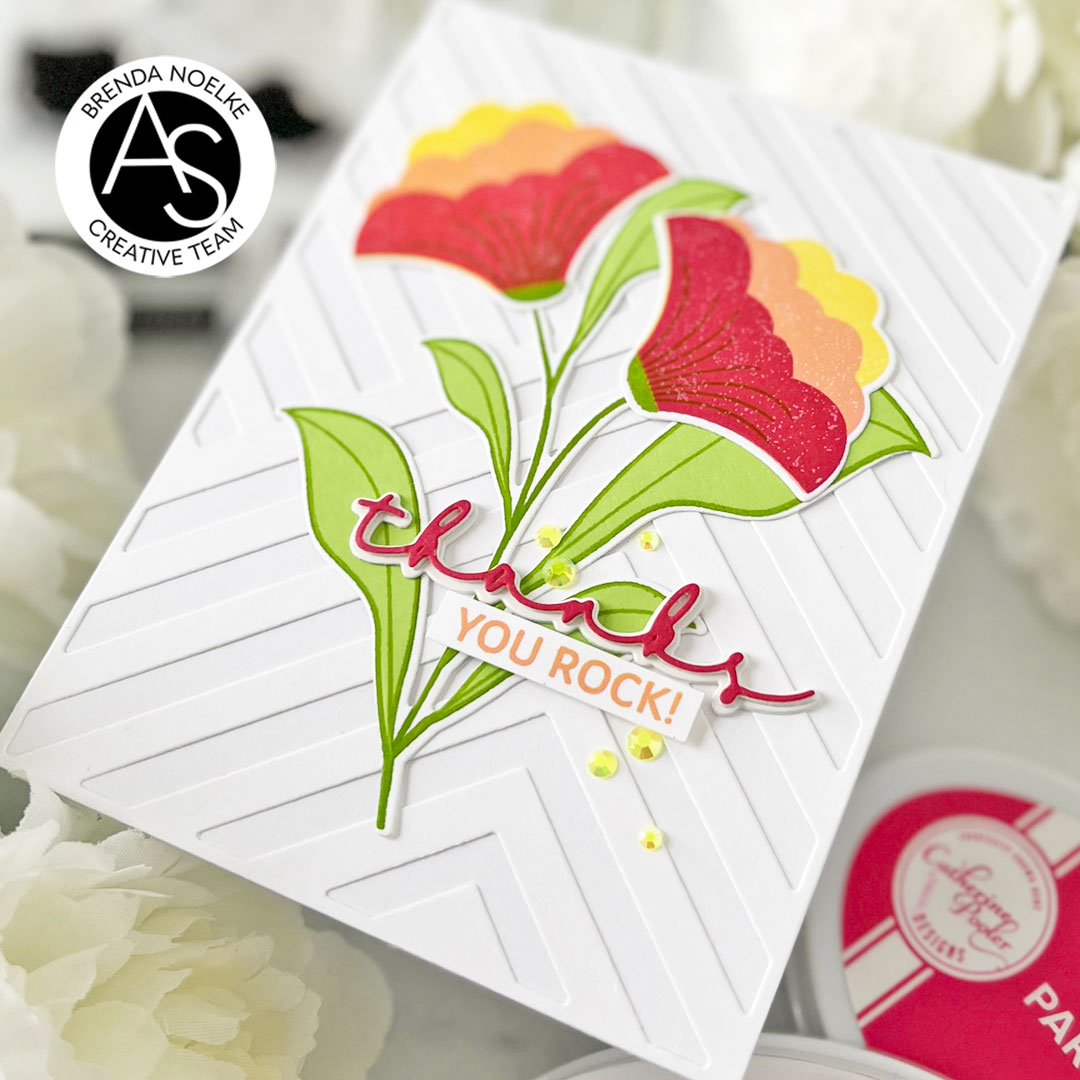 Thanks so much for popping in today!! Have a great weekend!!

Hello everyone!! My name is Brenda & I live in a small town in MO. I've been married to my wonderful husband, Doug, for almost 26 years!! We have three fur babies, Bailey, Sidney (both golden retrievers) & Abby (a 10 month old mini goldendoodle)!! I have always had a creative side, especially a love for coloring. I even competed in a coloring contest when I was in grade school & won several tickets to Six Flags. During high school & college I airbrushed T-shirts at Six Flags. I became involved in papercrafting through scrapbooking, which I did for several years. The last several years I have become addicted to card making. I LOVE coloring with all different mediums, including inks, Copic markers, watercolor, Zig watercolor markers, colored pencils, etc. It's my therapy...lol!

Create your own happy

The Stars Are the Limit – Smile and...

Clean and Simple For You

Some kind of weave

Happy Birthday From All of Us

Create your own Happy & Life is Good